For those of you who manage social media for events or are event planners for public gatherings, this is a strange place to e right now.

The Corona Virus has put us all in a place we have most likely never been. Event halls are closed, cities, counties, and states have restricted gatherings and that hits us all hard.

We have events planned and they have been on Facebook for a while and now we can’t hold the event as planned, but what do we do with that listing?

Well, here are a few tips in this video.

So you have an event page made on Facebook and due to circumstances, maybe your city is shut down, you aren't allowed to have a gathering. All this said now, you can't hold that event so you may be thinking you want to go in and cancel it or delete the page, don't do that!

I'm Sheryl Loch with Ginger Roots Media and I'm right there with you.

We've had events, some of them for a year that we've been building and all the sudden because Las Vegas is completely shut down we can't hold our event as planned.

So I could go in and just hit cancel the event, no you don't want to do that!

According to Webster's, cancel means to decide not to conduct or perform something planned or expected, usually without expectation of conducting or performing it at a later time.

So what does that mean when you hit cancel event then?

Let's head over to Facebook and I'm gonna show you a better way to let people know that you're not having your event when it's scheduled, but you're not going to just cut them off and leave them nothing.

Because you're gonna hold that event, it may be in a month, six months, a year, but you're not gonna want them to just feel cut off. So let's go on over to Facebook and I'll show you how easy it is to keep your people, keep the hope up and not lose track of them.

Okay here we are on my Off The Jacks events page where I have the car shows.

Now here are two of the events that we were supposed to be have coming up soon. One is the WelderUp open house the other was a Driven car and bike show.

The Driven car and bike show as you can see is kind of marked out it's really pale. It got canceled. One of the co-hosts went in and hit cancel, so this is what happens when you cancel. It kind of goes dark, it's not noticeable anymore, we don't want to do that.

We want people to still see it in their events list.

We want them to still know that we have contact, they can contact us. The WelderUp Open House has not been canceled. 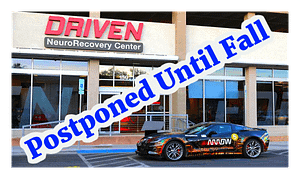 So let's go take a look at the Driven one that was cancelled. One of the things I want you to notice is, I had put a postponed on here and changed the description all before it got canceled.

But now that this is canceled, I can't edit any of this description. I can't edit the header. I have absolutely zero editing ability. So no matter what I wanted to do I'm kind of just stuck all because they hit cancel, which we don't want to do. So it's marked the dates out.

If I come down here to the details, I cannot change these at all, so that's why I don't like to cancel these. It looks very final and I don't want to give that impression.

Now the WelderUp Open House is actually supposed to happen real soon. People are bummed, but it is what it is. 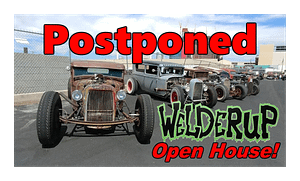 So what I did instead of cancelling, I postponed. I want people to know that we are still going to have the event. Whether we have it in a month, six months, we may not even have this open house again until next year (we have it in conjunction with Rat City Rukkus each year.) So it may be a year away, but I wasn't going to cancel and cut it off.

We're gonna have the event we don't know when. This means I also, up until the date of the event, it's still going to be in their event list. They can see big postponed when they look. It still has all the information.

I can still go in and edit the details, which I did when I found out that we weren't going to be able to have the event. I put the reason why, Nevada shut down basically due to the corona virus, I put that in there.

But what I can also do is, if I go to the discussions I can still make a post. I can still contact these people, which I will probably do here in just a little bit telling them you know we miss you, sorry this isn't going on, we hope to see you soon.

Also when I decided to postpone it, I wrote out exactly why it was postponed. That we want to see them again soon. We're going to do what we can and I have this at the top people can also come in and ask questions if they want to ask questions about anything up until the date of the event. I can still get those.

Now what I want you to think about too with this event, it's not hard for us to get people and get reach, because it's such a big event. But if you are having a hard time getting responses to your event, go in and you may want to postpone it. You're gonna want to give a good description, put in the details in a post make sure you keep checking it for questions.

But what I'd like to see you do also, is go up here and on the three dots in the upper right, what you can do is come down and export guest list. I don't have to do that with this particular show, but if you don't have a lot of responses you're going to want to do this, so when you put up the new event, when everything settles and you can reschedule, your then you're going to have your guest list that was interested this time that you can go and make contact and let them know you're your backup you're going, come check us out. So that's the important things I want you to see.

Just go in make a new header, make it postpone. You don't have to go to extremes, but whatever you do don't cancel, because you're going to lose interest. Okay so there you have it! It's going to take a little bit of work, a few minutes, it doesn't take that long.

But this way you still have a chance to be contacted by them, you can still keep in touch, they see your event, they know that you've not left them high and dry, you're just going to be postponed.

Thanks for watching be sure to subscribe, I've got more tips coming up for all your social media needs.